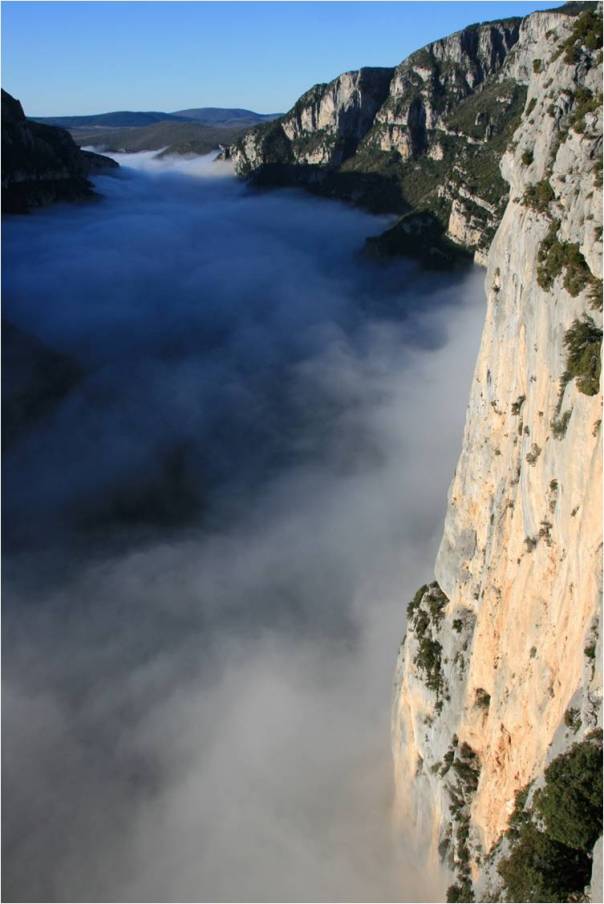 The Verdon has been a place I’ve wanted to visit ever since seeing pictures of the climbing legend Ron Fawcett grappling with the flawless smooth limestone above a massive drop. Add to this the fact that it’s in the South of France where the weather’s always great and the seeds of a trip begin to get sown.

I travelled there with a friend of mine called Andy Woolston who had visited the gorge once before and had clearly enjoyed it enough to warrant a return trip. We travelled over in Andy’s van leaving some beautiful weather in North Wales. Blue skies remained overhead until we were within half an hour of the Verdon when we drove into the worst thunderstorm that Andy or I had ever experienced. We thought the windscreen was going to get smashed by oversized hailstones and small landslides had started to encroach upon the road as the lightening reached a crescendo of almost non-stop light: it was like we’d just entered Mordor! We decided to turn around with our tails between our legs and took the longer road around to the Verdon. Andy leading the most difficult 5+ pitch in the world on Pichenibule. Photo- Calum Muskett

We awoke to blue skies and hot weather although evening thunderstorms were to remain the theme for the following few days. After a late start we abseiled in to climb the classic multi pitch test-piece ‘Pichenibule’ which tackles an immaculate smooth limestone wall in its upper reaches. Although we were underwhelmed by the first few pitches the quality of climbing soon stepped up a notch as we reached the band of high quality limestone some four pitches up. The crux 7c pitch was, as I expected it to be, totally desperate to on-sight although a sequence quickly came together after a couple of brief attempts. Thunder heralded the coming of bad weather though and I packed in about four red-point attempts of the pitch in ten minutes dropping the last move twice before big fat drops of rain began to fall which meant it was time for a hasty exit! I returned a few days later and managed the pitch free on my first go, but not without a lot of effort! 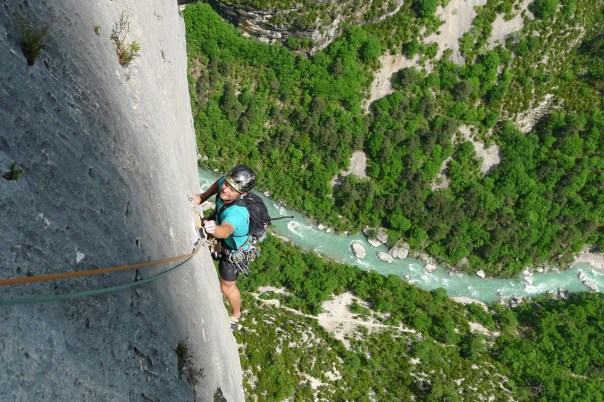 The following day we climbed the classic multi-pitch route ‘Les Marches du Temps’ which had some superb climbing with a more isolated feeling. Due to a slightly confusing topo we made the error of starting up neighbouring route ‘El Topo’ which is perhaps the hardest multi-pitch offering in the Verdon. This left us well warmed up by the time we were able to get back on route!

On our third day we climbed perhaps our favourite route of the trip called ‘Les Rideaux de Gwendal’ which had sustained climbing with really good quality limestone all the way. When we were about two pitches up the route we could hear thunder nearby and sure enough it started to drizzle. The danger of being caught out by a thunderstorm in the Verdon is that you will be totally unable to get back to your car at the top of the gorge. Faced with this scenario your best option would be to abseil down the route you’re on, walk several miles in your rock boots to reach the nearest road and then hitch a lift for over ten miles back to the top of the gorge. We were pretty keen not to be caught out by the weather so frantically linked pitches together giving ourselves ludicrous amounts of rope drag and reached the top in double quick time, just in time to see the sun come out!

We spent another three days in the Verdon climbing some other amazing routes such as the long and strenuous ‘La Fête des Nerfs’ and the superb ‘l’Ange en Decomposition’. The Verdon certainly has some of the best multi-pitch climbing that I’ve ever done and it seems to have fallen out of favour with both visiting and local climbers nowadays which was great for us but a real surprise for such a world famous climbing area. So if you’re in search of some exciting sport climbing in an amazing area then this is the place for you!

After our time in the Verdon we made a quick visit to the world famous limestone cliffs of Ceuse. The climbing was of course great but undoubtedly the most memorable moment was watching Adam Ondra climb there. A couple of days after making the first ascent of a long standing project called ‘Jungle Boogie’ he attempted to flash ‘Realization’, Chris Sharma’s legendary 9a+. The crag came to a standstill as he donned rock boots and tied in and what followed was an extremely impressive attempt. He failed at the crux high up on the route but in the process had climbed past the chains of ‘Biographie’, an 8c+! I’ve watched a lot of very strong and talented climbers over the last few years but he is in a different league to them all and left people at the crag awestruck with his effort and ability. Inspirational!