The last couple of months have been a whirlwind of work and play (although mainly work!). After returning from the Alps I enjoyed some good skiing, ice climbing and rock climbing all in the same week in North Wales. In fact, on one day, I skied down Glyder Fawr first thing in the morning, climbed an E6 at Gogarth, went for a boulder, instructed for a couple of hours and finished the day off with an ice climb! 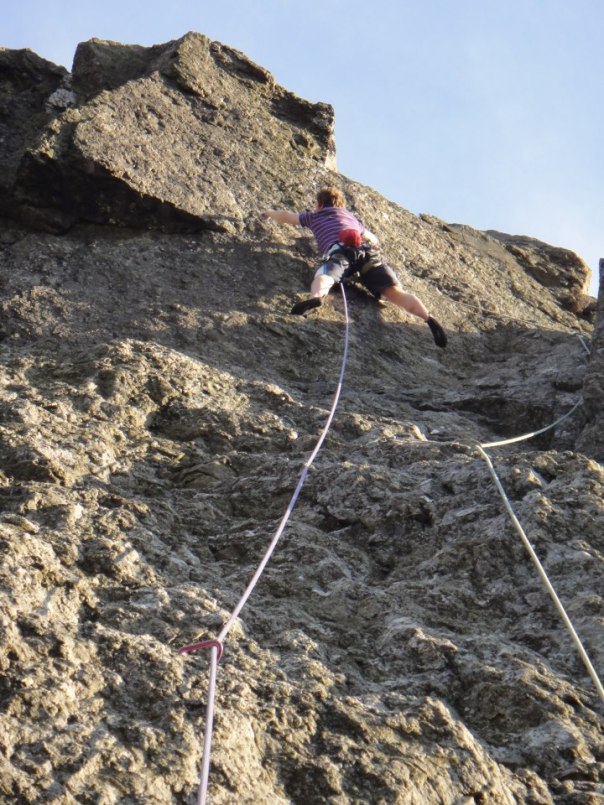 The weather in Wales has been, in general, really good this year, albeit a bit chilly. At the beginning of May I travelled to Pembroke with Dan Mcmanus for an awesome bank holiday weekend. We climbed stacks of great routes and caught up with loads of friends. It was the kind of trip that reminded you how great climbing can be: three star routes, sunshine, getting pumped and having cream tea in the brilliant Ye Olde Worlde Cafe. Some of the standout routes were Crimes of Passion, Fortune Cookie, The Pulsebeat and Ghost Train. Ghost Train in particular was a route I’d been hoping to do for quite a while, however, up until this trip it had always been a bit too wet to climb. There’s a very big run out on the route to reach a thread at about 25m from where I remember thinking I really wouldn’t want to fall, as it would leave you taking a massive, ground sweeping fall. A good friend of mine, Will Oates, fell at exactly this point last week and through the quick reactions of his belayer didn’t hit the ground but took an absolutely humongous fall…respect Will! Dan Mcmanus leading the out there ‘Why Should I’, E6 6b at Pembroke. Photo- Calum Muskett

Since that trip to Pembroke I’ve been working 70 hour plus weeks, losing the fitness I’d gained and feeling utterly exhausted on my occasional days off. So it was with relief that I found my two and a half days off last week coincided with the warmest weather of the year; and that meant only one thing- Cloggy!

Cloggy has got to be one of my favourite cliffs to climb on in the world; probably because my memories of climbing there are always of the warm and dry weather that are pre-requisites to go climbing there. My first visit there was on an after school raid with Francis Blunt when I was 14 years old. I’d just been given a copy of the classic and rare British climbing book ‘Extreme Rock’ and was inspired to try ‘A Midsummer Night’s Dream’ having read the account of Ed Drummond’s early ascent. I met up with Francis outside the old Safeway’s store in Bangor at 3.30 in the afternoon and we raced up to Cloggy to arrive at a sun baked Great Wall with a pleasant gentle breeze. I remember setting off in the wrong place for ‘A Midsummer…’ and making quite a long and technical traverse to gain the route, but after that all I can remember are the intricate sequences of moves and the long run out with climbing that is never too hard and never too easy to reach the Great Wall belay feeling utterly satisfied. So it was with happiness that I returned to Cloggy for the first time in nearly two years with on-form Cumbrian James ‘Caff’ Mchaffie and Ed Booth. Caff has been ripping things up lately in his typically understated way. He’d just returned from a trip to Scotland with an ascent of the Longhope route under his belt and the previous day he’d made the fourth ascent of ‘Rare Lichen’, an E9 at Ogwen. Keen not to show any signs of weakness to Caff, I stick to my word and “warm up” on the utterly brilliant arête of ‘Authentic Desire’, a route that I’d waited a long time to climb.
With the warm up out of the way, Caff was ready for the main event: an on-sight attempt of ‘Margins of the Mind’, an E7/8 6c with a BIG reputation. Caff took a while to find his way through the initial roof before placing plenty of poor gear behind rattley flakes as well as sky hooks kept in place with blue tac. He spent a long time on the crux going back and forth on small, lichenous crimps before finally committing to a sequence and reaching a good rest as well as a poor wire and skyhook placement. From here, Caff faced one final difficult move; a long reach up to a jug protected by the skyhook and poor wire beneath his feet. Caff spent ages going up and down, trying to work a sequence to get through the move, at one point nearly succeeding before he pulled off a thin side-pull. After ten “last goes” he was looking very frustrated and tired. After ten more “absolute last goes” he just looked deflated that he couldn’t figure out a good enough sequence to get him to the finishing jug. He’d been holding on for four hours before I eventually dropped him a rope and it’s certainly the most impressive on-sight effort I’ve ever seen. Caff returned three days later and finished the route off after a brief abseil inspection. Reaching the easier ground on ‘It Will be Alright on the Night’, E7 6b. Photo- Luke Brooks

The following day I headed back up to Cloggy and climbed ‘It Will be Alright on the Night’, an excellent E7 that climbs the wall to the right of ‘Margins…’. The pegs seemed to be in pretty poor condition but there was just enough gear to back them up with which meant the route wasn’t too terrifying! I’m looking forward to the next opportunity I get to head back up to Cloggy, having noticed some new lines to do as well as some other classics to repeat.