It’s been quite a while since I last posted a blog (in fact, it’s been half a year!) and the reason for that is mostly down to not prioritising writing time rather than being completely inactive. My last post was about climbing in Norway last August which is when I first picked up a shoulder injury, likely a Slap tear, which has been plaguing me over the last few months. It’s had quite a big effect on my climbing and has led to spending some rest and recuperation time away from climbing. At its worst it’s painful and awkward putting a jumper on and at its best it doesn’t really affect my climbing and only feels sore. Because of this I thought I’d start doing a less shoulder intensive activity for a while – white water kayaking!

Unfortunately, as you may have suspected, I soon discovered that river kayaking wasn’t that great for my shoulder either. About one month into my paddling renaissance I capsized in some boisterous rapids and nearly tore my shoulder off rolling back up – this almost certainly put my shoulder recovery back by a couple of months! Despite that and considering that Wales had the wettest Autumn and Winter that I can remember, taking up river kayaking was a great excuse to get outdoors where I’d otherwise almost certainly be drinking tea and eating cake in front of the fire at home.

Wales has some classic white water kayaking and part of my reason for getting out again was to paddle two stretches of river that had evaded me when I was into paddling years ago. These were the Aberglaslyn Gorge below Beddgelert and the Afon Ogwen, which runs through my home town of Bethesda; two classic stretches of Welsh river paddling.

It’s pretty interesting coming at kayaking with plenty of climbing experience. Climbing is perceived as a risky activity and trying to put the same risk management/fear control in place paddling white water just hasn’t worked very well for me. It seems that kayaking, like downhill biking or steep skiing, is about commitment and knowing your limitations; little skill is required to land yourself in a whole heap of trouble and if you’re not up to the job then your fate is in the lap of the Gods! Climbing does of course have similarities but you do need some level of competency to get started, you have a lot more time to try and get yourself out of trouble and you have a rope to save your skin if all else fails. On top of that I guess my regular exposure to height and plenty of lead falls have expanded my comfort zone in climbing, whilst with kayaking I have an extreme fear of being stuck upside down in my boat! I find kayaking truly gripping! Well outside of my comfort zone, mid-way down Ogwen Bank Falls above Bethesda. Photo – Gabby Lees

My first bit of river paddling after a six-year hiatus was the Abberglaslyn Gorge, a sustained class 4 rapid descending swiftly from the quaint tourist village of Beddgelert. This was to be my hardest river to date and I was fortunate (?) to be with two particularly good paddlers who could keep me safe(ish). By some miracle I got to the end of the gorge in one piece having rolled only once at the very end (which was a fluke as I’d not rolled in six years!). Buzzing with adrenalin the guys got me psyched for a second run where I promptly capsized at the top of the rapids, failed to roll, and took a hideous swim down the river losing one of my favourite crocs along with most of my dignity!

Quite severely put off, but also strangely encouraged, I got a bit more paddling behind me and finally plucked up the courage to paddle the Ogwen, which was both terrifying and incredible. Although it’s not a river that I’ll be paddling all too regularly, due to me being rubbish at kayaking and a scaredy cat, it truly is one of the wildest outdoor experiences that North Wales has to offer and an amazing gem to have on the doorstep. Shortly after this I crocked my shoulder again, so kayaking play has been put on hold.

In the meantime, I have also begun the British Mountain Guide scheme with a great bunch of guys (where are the girls? It’s a bit of a sausage fest!) and along with the rest of the team, have passed the summer climbing, Scottish winter climbing and ski induction, which now makes me a trainee guide. I also passed my Mountain Instructor Certificate (MIC) at Glenmore Lodge which will open up some fantastic opportunities for work next winter in Scotland. 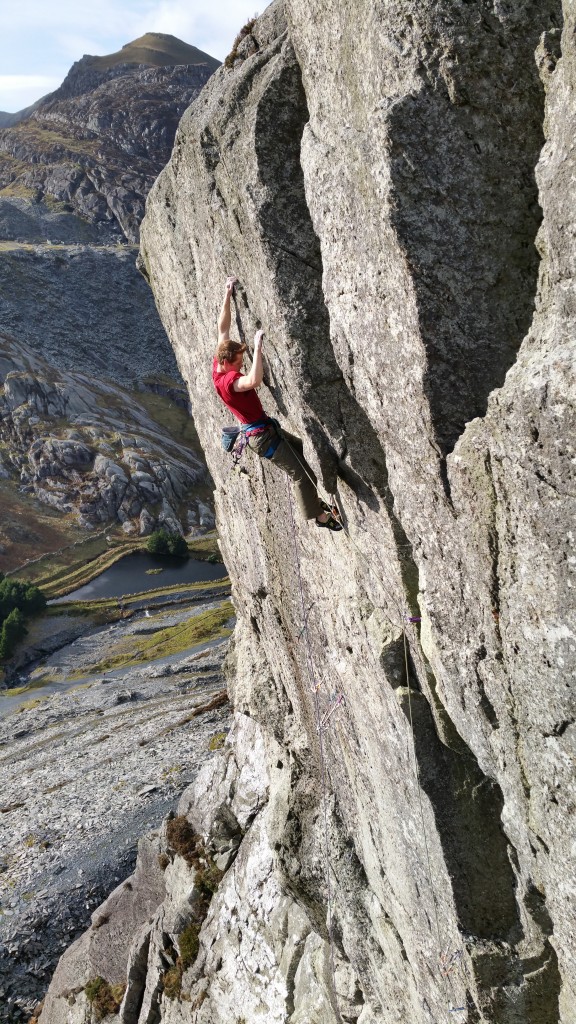 Amongst this, I’ve been out rock climbing, the highlight being a cracking new route, if I say so myself, on Craig y Clipiau in the Moelwyns, which I dubbed the ‘Ginger Ninja’ E7 6c, the neighbouring route being the ‘Crimson Cruiser’. Work and a bad shoulder has got in the way of climbing since the New Year and my first winter route of the season was the Welsh test-piece ‘Cracking Up’ IX 9 on Clogwyn Du – a route that I have wanted to climb for a long time. I foolishly thought that I wouldn’t get that pumped hanging off jug handles and my four days of climbing wall sessions leading up to trying ‘Cracking Up’ hadn’t been the best preparation. After a big tussle with the initial steep crack I was eyeing up the resting niche and victory only to be stumped by no hook placements in the rounded crack above me. I hung on as long as my puny arms could manage before finally slumping on the gear above my head; unfortunately, I’d missed out on a bomber choc-stone in the back of the crack below where I’d been reaching with my axes, I’m sure I’m not the only one to have made that mistake though. 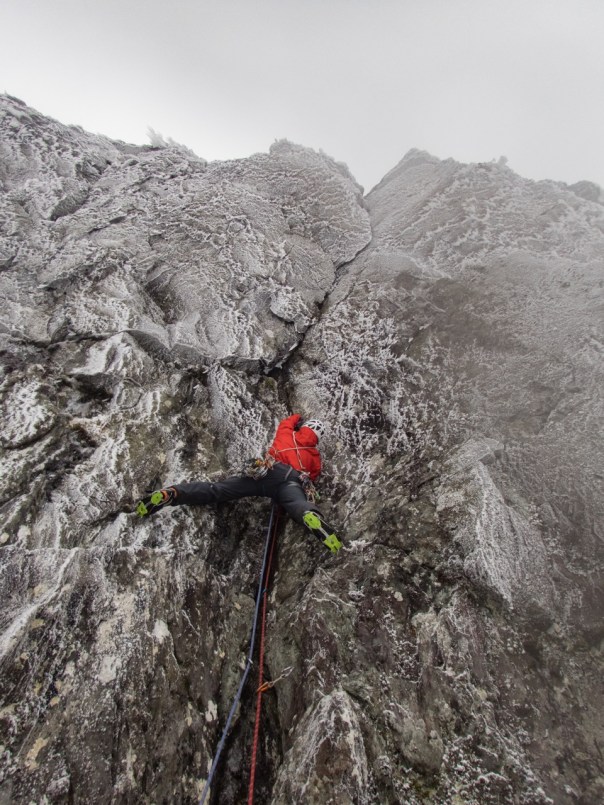 Punta d’u Corbu in Corsica, home to some of the best granite climbing in the world. Photo – Calum Muskett

Back in November I booked a climbing trip to Corsica with Shropshire’s fifth strongest climber Ed Booth. Ed’s been going from strength to strength in recent years, probably due to his state funded climbing career as a fireman. I was hoping that his recent marriage might have slowed him down, but there was no such luck on this front. We were heading to Corsica to pursue my ambition of failing on all of the hardest multi-pitch routes in Europe, I can now proudly add ‘Delicatessen’ to that list!

We arrived in Corsica on the 9th of March with a week-long trip planned to sample Corsican climbing. I’d walked the incredible GR20 trail with my parents when I was thirteen and remembered the amazing granite rock architecture and my memories didn’t disappoint us. Our first route was ‘Jeef’ a 7b multi-pitch of some renown. The climbing was incredible with perfect quality granite and funky featured rock. Unfortunately climbing ‘Jeef’ was also the coldest rock climbing experience I’ve ever had – I thought rock climbing in the Mediterranean would be a little warmer in March! The main event of the trip was our attempt of ‘Delicatessen’, a multi-pitch 8b first climbed by Arnaud Petit and rumoured to be one of the very best routes of its grade in the world. Our first impressions were very positive. Amazing technical climbing on perfect rock, well bolted and in an amazing setting. The crux first pitch of 8b could be split into two sections: a strenuous lower wall which is about 8a in difficulty, followed by a 7c slab which is all too easy to fall off after the climbing below. We quickly started to piece the route together and were fairly confident of success.

It snowed the following couple of days which rather put a dampener on our climbing aspirations and it was freezing cold when we finally got back on the route. I managed to wrench my shoulder, inflaming my old injury on the powerful lay back moves at the bottom of the pitch and took some time figuring out a way to chimney past the hard section, whilst Ed went full charge and managed to red-point the pitch. After another rest day, spent mostly looking at the thin skin on our fingertips and willing it to grow back, we had our final day on the island before catching the ferry back to the mainland. We knew that we didn’t have enough time to finish off ‘Delicatessen’ in full, but it was a good opportunity for me to try and red-point the crux pitch and I was fortunate enough to pull the lead out of the bag first thing in the morning. It was a shame to leave the route uncompleted, as I suspect climbing the rest of ‘Delicatessen’ wouldn’t have felt too difficult over the course of a day, but it was also great to have salvaged something from a trip that we nearly called off after viewing the weather forecast. The Corsican multi-pitch we sampled was brilliant and I’d thoroughly recommend it to any climber operating from 6a upwards. It has the best granite I have ever climbed on and its location, in the spectacular Bavella region of Corsica, is second to none. I’m sure I’ll be back in the not too distant future, but most likely at a warmer time of year! 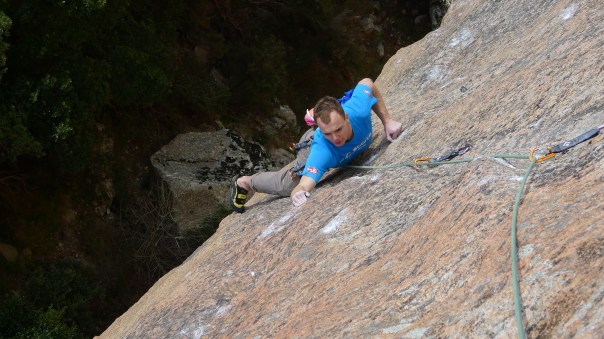